The Rise of Global Civil Society: Building Communities and Nations from the Bottom Up

In 2008, the Bradley Foundation funded then Sagamore Senior Fellow Don Eberly to write The Rise of Global Civil Society. In the book, Eberly calls attention to the role of volunteerism and compassion as “America’s most consequential export.” In an increasingly globalized world, charity and citizen-led initiatives are becoming an integral part of the development conversation.

“The opposite of poverty is prosperity. Much of the debate over poverty for the past several decades has focused on charity and foreign aid as remedies. Yet while the world was haggling over which countries might be able to donate a billion or two more annually, China and India created $700 billion in new economic development. Their bold departure from stagnation and poverty happened in large part because they figured out how to participate in globalization. The problem with much of Africa, the Middle East, and Latin America is too little globalization.”

Don Eberly is a scholar and speaker on civil society. He has authored or co-authored numerous books, including The Civil Society Reader and Civil Society in the 21st Century, which is circulating among democratizers in the Middle East. He has served as a senior counselor for civil society at USAID, a senior advisor on Iraq, director of private sector coordination for tsunami reconstruction at the State Department, and a deputy assistant to the President of the United States. 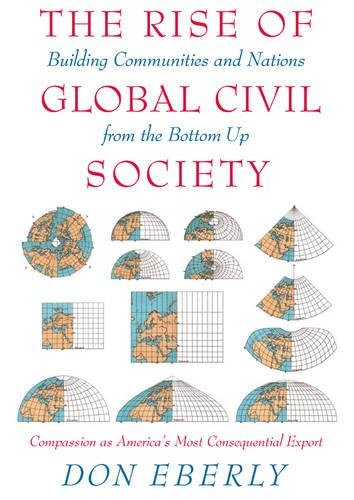 Since the 19th century, America’s role in the global order has been both highly salient and highly contested. As of late, we are more often reminded of the latter characteristic. America’s global reputation is at an all-time low, and the international maneuver for which we are best known is our hand in the seemingly never-ending war in Iraq. Given our despondent image on the world stage, one would assume that the U.S. has been quite miserly in the granting of foreign aid. The truth is much more complicated (and much more sanguine).

The truth is that the U.S. provides more foreign aid than any other country. However, the country still falls short of the internationally accepted benchmark of 0.7 percent of GNP. Although the same can be said of most wealthy countries (the global average is 0.4 percent), the U.S. averages only 0.2 percent. This disparity becomes less concerning, however, when one considers the flow of U.S. foreign aid that most often goes unaccounted for because of the source: the private sector. Twenty-five years ago–when government aid accounted for 70 percent of all American outflows–judging the U.S. upon the basis of public spending on foreign aid would have been appropriate. However, today–when 85 percent of all outflows come from private individuals, businesses, religious congregations, universities, and emigrants–the metric by which we judge American spending must be adjusted.

Acknowledging private sources of U.S. foreign aid—and thereby adjusting one’s view of American generosity towards the global community—makes possible a serious consideration of the question: are attempts by American citizens and their government to alleviate poverty and promote institutions for democracy and free enterprise succeeding? This is the primary question addressed by Eberly in The Rise of Global Civil Society. In this work, Eberly encourages critics to adopt a new metric by which to judge the success of foreign aid. He states that the standard model of evaluation has always prioritized public aid over private and the quantity of money being given rather than the quality of poverty reduction and institution building being achieved.

The first step in answering the author’s primary question is an acknowledgment of the tectonic shifts taking place in how the poor are viewed and how poverty is confronted. Attempts by elite policy experts to bring about prosperity have mostly failed, inspiring works of scholarship like Dead Aid by Dambisa Moyo. The declining trust in bureaucracy in general and the American government in particular has forced a transition from top-down, rule-driven bureaucracy to bottom-up, innovation-driven social entrepreneurship, private philanthropy, public-private partnerships, faith-based initiatives, and global grass roots linkages. This transition was not only motivated by a lack of faith in bureaucracy, but also a desire to replace a “helping” approach with a “partnership” approach.

Almost nowhere has this shift been quite as pronounced as in the U.S. As mentioned earlier, the public to private ratio in U.S. foreign aid has been (more than) entirely reversed in just a couple of decades. The sort of associational tendencies exhibited by Americans in bringing about this shift was noted by Alexis de Tocqueville all the way back in the 1800s. The substantial and steady flow of private aid streaming from America is why Eberly points to compassion as America’s most consequential export. With the help of unprecedented communications technology, philanthropy, volunteerism, and a proliferating array of NGOs, America’s citizens are spreading the norms of civic community and private enterprise around the globe.

In the midst of these promising trends, there is also much to be sobered by. Eberly indicates a concern about the accelerating rise of ethnic and sectarian division. He is especially wary of regression in the Middle East and other traditionally-Muslim societies toward factionalism. After devoting an entire chapter to the role of religion in generating the “best and the worst of civil society,” Eberly concludes that any short-term advantages that might be gained by extremist movements will eventually be overridden by the popular desire towards freedom and prosperity.

According to Eberly, the key moving forward will be finding innovative ways to harness the best of both the public and private sectors to create a new era of experimentation that relies on markets and on civil society: with the poor working everywhere as leaders in their own development. Eberly distinguishes his work by noting that the reasons for encouraging local leadership extend beyond a philosophical commitment to respect or equality. Local leadership simply makes sense when considering the fact that the capital in poor countries already far exceeds the value of foreign aid being given to them. The idea that poor countries have nothing tangible to offer in a partnership with the developed world is a myth that harms all involved. The value of capital in poor countries has long been suppressed by mismanagement of economies and governments. This is why private partnerships have proved so beneficial. Tactics such as microenterprise and microfranchising tap “native capability at ‘the bottom of the pyramid’.”

Eberly’s work convincingly portrays the benefits of “bottom-up” tactics. The current momentum of private partnerships must be continued so that under-developed countries are better able to harness their incredible potential. Not only will this bring about economic flourishing, it will also allow for civil society to thrive. If democracy is to be advanced, it cannot be by merely forcing elections on nations that remain in a state of underdevelopment. A rush to achieve the symbolically satisfying results of an election runs the risk of producing illiberal outcomes. Democracy is simply not possible without citizens who appreciate its value, and private enterprise creates the sort of opportunities necessary to an appreciation of democracy’s core elements.