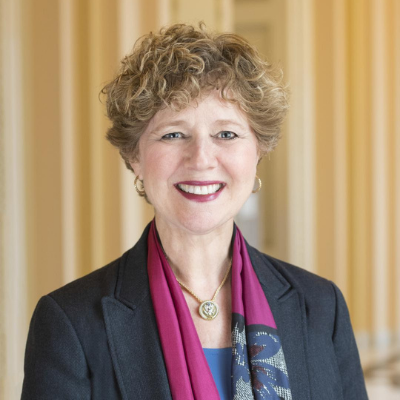 Former Congresswoman Susan W. Brooks represented the 5th District of Indiana from 2013-2021. She served on the House Energy and Commerce Committee and was a member of the Health, the Communications and Technology, and the Oversight and Investigations subcommittees. Through her membership on the Energy and Commerce Committee, Congresswoman Brooks worked on mental health, substance abuse, biodefense, public safety, telecommunications issues and more. She also served on the House Select Committee on the Modernization of Congress where she focused on restoring confidence in Congress and making it easier for Americans to participate in the business of the People’s House.

Before joining the House of Representatives, Susan served as Senior Vice President and General Counsel for Ivy Tech Community College from 2007 – 2012. Collaborating with a wide network of stakeholders, she implemented workforce development strategies aiming to enhance job training and placement for thousands of Hoosier residents.

In 2001, President George W. Bush appointed Susan as U.S. Attorney for the Southern District of Indiana. Serving as the chief federal law enforcement officer for a majority of the Hoosier state until 2007, she received bi-partisan acclaim for efforts to battle mortgage fraud, gun violence, drug trafficking, gangs, child exploitation and identity theft.

Susan also earned recognition as Deputy Mayor of Indianapolis during the Steve Goldsmith administration, where she provided oversight of public safety operations and drove community dialogue on vital civic issues. Over her tenure, she managed police, fire and emergency response efforts while serving on boards related to criminal justice, community corrections, violence reduction and race relations.

Susan received the inaugural Congressional Biosecurity Champion from the Alliance for Biosecurity for her work to improve our readiness for chemical and biological threats like Ebola and anthrax. The Community Anti-Drug Coalitions of America honored her with the Congressional Leadership Award for her work to address the heroin and opioid epidemic. She was also named the Indiana Chamber of Commerce 2014 Government Leader of the Year and is the recipient of the Nancy A. Maloley Outstanding Public Servant Award from the Richard G. Lugar Excellence in Public Service Series. In addition, she received the “Spirit of Enterprise” Award from the U.S. Chamber of Commerce each year she has served in Congress and the Nathan Hale Award from the Indiana Reserve Officers Association.