Honoring the Service and Sacrifice of Military Veterans

Capstones: Trials and Tests in Taiwan

On June 12, 2022, Blair Milo, Founding Director for the Center for Talent and Opportunity at the Sagamore Institute, completed the Ironman 70.3 Eagleman triathlon in Cambridge, MD as the veteran athlete in the Ironman Foundation’s Gold Star Initiative.  Known as some of the most challenging athletic endurance races, Ironman triathlons invite athletes to complete an open-water swim of 1.2 miles, bike 56 miles, and run 13.1 miles in the 70.3 distance.  Full Ironman races double the distances for a total of 140.6 grueling miles.  Through the Gold Star Initiative, the Ironman Foundation selects six races per year where a military veteran athlete is paired with a Gold Star family to join the family in presenting the flag at the National Anthem then complete the final run portion of race while carrying the flag in honor of the servicemember and their family.

A long-time advocate for physical activity and public health, Blair has accomplished many athletic achievements in her career, but this Ironman was one of the most influential races she has participated in.  She shared, “There aren’t enough words to express how powerful this experience was. Getting to know Lieutenant Colonel Anthony Shine through his daughter, Colleen; gaining amazing new friends and inspirations in Colleen and the co-founders, Mike Ergo and Lisa Anderson; plus the blessing of feeling such gratitude and motivation from the fellow athletes and spectators for the sacrifice and opportunity the American flag represents…these are gifts I’ll treasure the rest of my life.”  She continued, “There’s not a doubt in my mind that Anthony Shine and an army of angel warriors accompanied us throughout the journey, and I’m so grateful for the opportunity to continue carrying forward their spirit of service to fellow warriors, their families, and this nation.” 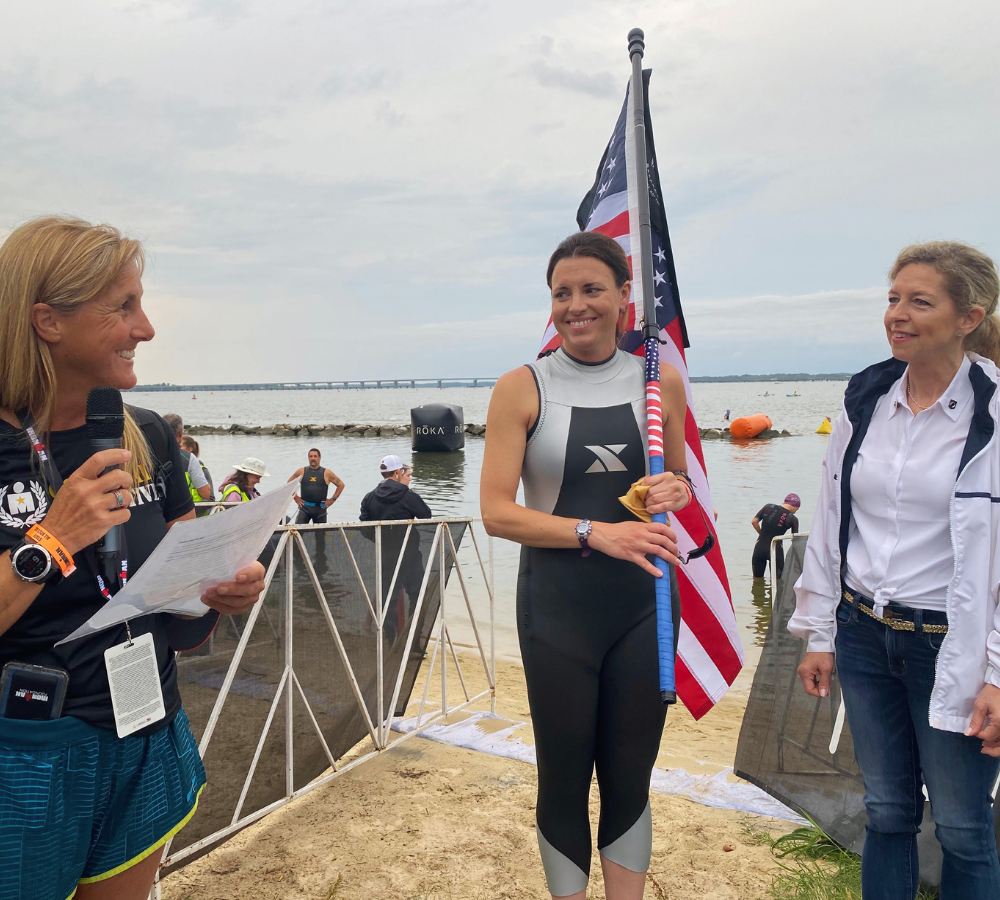 Unpacking Milo’s journey with the Gold Star Initiative is like peeling an onion, only to find another layer of immense impact from a seemingly small part of a whole.  The Gold Star Initiative was co-founded by USMC Corporal Mike Ergo and Lisa Anderson, whose son, Lance Corporal Nick Anderson, was killed in Iraq in 2004. Ergo served from 2001-2005, completing multiple tours to Iraq.  His unit lost 29 members who fought in the Second Battle of Fallujah, including his best friend, Cpl. Todd Godwin.  After struggling with drug and alcohol addictions in response to his PTSD, Ergo entered a rehabilitation program that would lead him back to a love of working out – a place where he could process his experiences. After watching an Ironman 70.3 event in 2014 he began training to compete himself, while carrying an American flag in honor of friends that gave the ultimate sacrifice. Around the same time as his first Ironman, Ergo met Anderson, who lost her son while he was in service in Iraq. The pair bonded over the experience of physical activity being a key part of their healing processes. In 2007, Lisa began running the Marine Corps Marathon in Washington, D.C. with now Major Scott Cuomo, USMC, who served as her son’s platoon commander.  She and Maj. Cuomo have run the marathon together every year it’s been held when he wasn’t deployed.

The Gold Star Initiative is Ergo and Anderson’s way to share their passion for athletics to help veterans heal and honor Gold Star families and their losses.

One month before the race, Milo learned she’d been selected to serve as the veteran athlete in the Ironman Foundation’s Gold Star Initiative, honoring the family of Lieutenant Colonel Anthony (Tony) Shine, who served as a fighter pilot for the United States Air Force. Anthony was one of four siblings, all of whom served on Active Duty during the Vietnam War.  In 1970 he returned home from his duty in Vietnam to escort the body of his younger brother, Jonathan, for burial after he was killed in action shortly after his graduation from West Point.  After the funeral, Lt Col. Shine returned to his duties in Vietnam.  On December 2, 1972, Shine’s aircraft disappeared beneath cloud cover in North Vietnam.  After an extensive search and rescue mission he was listed as MIA.  It was over 20 years before his remains were located, repatriated, and finally positively identified in 1996. His brother, Alexander, was also seriously wounded, earning the Silver Star, before retiring as a Colonel in the U.S. Army, and his sister, Sarah, retired as a Lieutenant Colonel in the U.S. Army Nurse Corps.  When Milo received the news that she would run in honor of Lt Col Shine, she was put in contact with his daughter, Colleen Shine. A young child when her father was listed as Missing in Action, Colleen became an ardent advocate for POW/MIA and Gold Star Families and served as the spokesperson for the National League of POW/MIA Families.  She remains an active advocate with regular engagements at the White House, U.S. Capitol, Pentagon and with Veteran Service Organizations across the country.  Today, there are over 80,000 servicemembers who hold the status of Prisoner of War and/or Missing in Action. 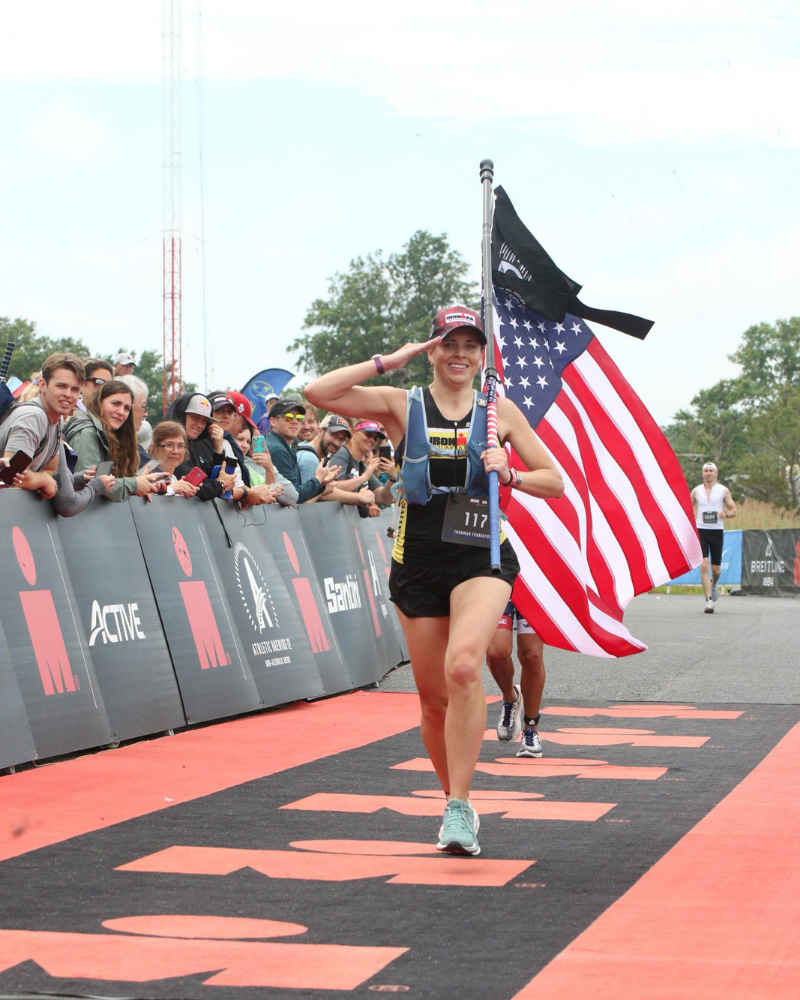 As race day approached, Ergo reached out to Milo offering encouragement in advance of the weekend.  “Don’t forget that you are the beating heart that keeps his memory and brings that to the Shine family…Be the fierce hearted warrior you were born to be.” Race day itself brought even more treasures of the journey.  Over 2,600 athletes participated in the Ironman 70.3 Eagleman with thousands more spectators lining the course throughout the day.  Milo claims at least half of her fellow athletes went out of their way to cheer the flag, often offering up a salute or cheers of “Yeah USA!” and “Go America!” At one point during the run, a runner traveling the opposite direction began to sing out, “God Bless America…” Milo jumped on the opportunity to sing along, responding with, “…Land that I love!” Surrounding runners were then “treated” to a half sung/half shouted duet of God Bless America between the two runners until the two were too far apart to hear the other. Multiple exhausted runners, struggling to find any remaining source of energy gasped out, “I needed to see that right now.  Thank you,” as Milo pressed to the finish.

When she approached the finish line, fully exhausted by the physical and emotional journey of the day, she felt an inexplicable burst of adrenaline to sprint to a personal record finish of 6 hours and 29 minutes while holding a salute for Lt. Col. Shine and all Gold Star and POW/MIA Families.  Holding back tears, she presented a beaming Colleen Shine with a flag at the center of a story rich in blessings yet still in its beginning chapters. On August 6, 2022 Milo will carry a flag in the Lake Max Triathlon, hosted at Culver Military Academy, where US Army Col. Alexander Shine (Ret.), brother of Lt. Col. Anthony Shine, served as Commandant of Cadets at Culver Military Academy from 1990-2000.