It seemed fitting that Building Tomorrow, an organization dedicated to building schools in Uganda, should have offices inside of the refurbished Clemens-Vonnegut School  9 building off of Fulton St. While this school may have been closed for years, Building Tomorrow uses the building as HQ for operations that, over the past decade, has opened nearly 40 schools in Eastern Africa. Giving the building’s history and the organization’s purpose a charming symbiotic vision: the education of youth.
George and Building Tomorrow have received funding from the Clinton Global Initiative, the inaugural Simon Fellowship for Noble Purpose, as well as from countless universities and colleges. Building Tomorrow was named by Echoing Green as one of the top 20 up-and-coming social change organizations in 2007, and George himself was placed on the 2012 Forbes 30 under 30 list for Social Entrepreneurs.
Some might wonder why an organization such as Building Tomorrow would opt to reside in the Midwest rather than NYC, San Francisco, or D.C., cities considered the geographical flypaper of U.S. philanthropic organizations.
Initially, it was to conserve funds. After graduating from William & Mary, George moved back in with his parents in Indianapolis, IN to offset the costs behind founding an NGO. “I knew that I could make the little money I had last longer if I came back to Indiana. The low cost of living here, and my community ties were crucial.”
As he was working to establish Building Tomorrow he came to realize something special about the state. “Indiana is a very philanthropic community. It wasn’t easy to get this thing started. I was lucky to have a lot of people here that I could rely upon. They had their eyes and ears open, looking out for me and trying to help. Indy ended up being a really good place to begin in and become the home of Building Tomorrow.”

What made you decide to stay here after getting started instead of moving to a place like D.C., San Francisco, or NYC?

“In those places there is a lot of competition to be in the philanthropic space because so many groups are already there. From a business perspective, it [Indiana] was an easier place to do business. It is an easier place to call your office, to hire people, and pay your people well enough so they can provide for their needs. That was a big selling point for Indianapolis. I think there are challenges of being based here, but overall it has been very good to us.”

What are some of the selling points of the city?

“There is a great sense of community that exists here. Not to say that it doesn’t exist elsewhere, but it’s very prevalent here. Also, Indy has the amenities of a big city, while still being accessible. I was out in Washington D.C. earlier this week and felt tired of traffic, and the lack of green space. It felt suffocating. I think Indianapolis has a lot going for it. It’s walk-able downtown, has great sports teams, and is an easy place to navigate.

Lastly, again, the low cost of living, especially since we have a limit to what we can afford to pay people. To be in a place where you can stretch your dollar a little bit more is critical. And we’ve been able to take care of our folks relatively well, in a way that we might not be able to afford in NYC, San Francisco, or D.C.” 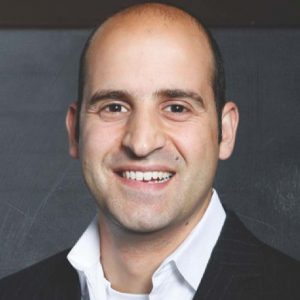 What made you think you could make a difference?

“I was very fortunate growing up to have been involved in different organizations that focused on creating social change. Whether it was the Special Olympics, the U.S. fund for UNICEF, or the UN World Food Programme; many different things taught me the importance of social change.

From a skill set standpoint I realized that I liked creating and enjoyed the entrepreneurial spirit. I wanted to find a way to have that passion for creating change at the forefront of what I was doing. It was the intersection of my passions and skill-sets. I think there is a lot to be said about finding the meeting ground between your passion and your skill-set, and acting on it. Not just knowing it, but doing something about it.”

Why did you start your own organization?

“My first line of thinking was not to go out and try to start my own thing, but rather to partner with an organization to galvanize young people to join in this work. I fell into this because I found no one that receptive to that call. I don’t know that I would necessarily say that anyone should’ve believed in us, but I do think that it comes back to passion.

People could tell that I wanted to figure out how to make this thing work. Come hell or high water, I was going to do it. And that’s what was fueling me. But if you were to take a step back and look at the beginning of all this and ask, “What does a twenty one year old know about building schools half a world away?” I would say, “absolutely nothing”. That’s a matter of fact. We were able to find a lot of really good people along the way that were willing to invest and see this happen all the way through. That’s how Building Tomorrow began.”

Were there ever moments when you thought of dropping your dream of Building Tomorrow?

“There was one day when I opened up my bank account and all I had was about $38 in it and I just thought, “I don’t know that this is worth it.” And…you just keep whittling away at it. It’s totally the realities of a startup and trying to go out and make something happen even though all you’ve got is a prayer and good intentions.”

What impact has Building Tomorrow had over the past decade?

“On a very surface level, there is a sense of excitement and pride communities have when a school is placed in their village. There’s a sense of pride that comes with access to education. I think that’s good. Creating a safe learning environment for thousands of kids makes a big difference in their lives. We have seen kids that have gone on to secondary school, which empowers them to lead healthier and more productive lives than they would’ve before.  But, we are not satisfied with that. We continue to hit the drawing board and are trying to enhance our impact…It is an ongoing process of reiteration…

That’s where our fellowship program came from. We wanted to provide leadership opportunities for students that have just finished their college studies in Uganda. Through the program we wanted to influence the way in which head teachers view themselves as leaders of schools. Without strong teachers, you won’t have a strong school. We’ve always wanted to increase our impact and make it even stronger. And I think that’s where we are at now.”

Tell me more about your fellowship program.

“Our fellowship program takes Ugandan students who have recently completed their studies and puts them in a twenty-eight month long program of working with us in the schools. They train with us, and are immersed in the communities in which we are serving. They teach for a month and then they serve for two years as a liaison to the community to help the school improve and invest in human capital.

We’ve realized in our theory of change that if you don’t have a strong head teacher, you wont have strong results in the school. And so we are committed that not just the schools we construct but also the schools that are funded and looked after by the government are exposed to this fellowship program so that quality of teaching is increased across the board. We have a current class of ten fellows that work with 40 schools and are in the process of selecting our second class of ten who will take on another 40 schools, and then in the three years we will hire a total of 130 fellows who will be working with about 520 schools total throughout the country.”

What does being a good community member or citizen mean to you?

“It’s being a good steward of what you’ve been afforded. Finding a way to share that as widely as you can. So, in my case, I grew up here, I had amazing friends, amazing school, amazing family, and that’s not the case everywhere. So, what’s the little thing that I can do, what’s the small movement that I can try to build to ensure that someone somewhere has access to remotely the same things?

I think some of the most interesting criticism I’ve gotten is why do you do this work when there are people in your backyard that don’t have things as nice as they’d like? And its not to say that isn’t true, but I think a good community member recognizes that it isn’t an either or, especially today when we live in a world that is so small.

I was in a meeting yesterday and was asked what can we do about all of these Syrian refugees? And the truth is there have been refugees from Syria and other parts of the world for a long, long time. But now, it startles us because some of these people are going to be coming to the United States, and parts of Europe. Now that people realize that some one so far away is going to be in their own backyard, its too late to realize that a little bit of investment in some parts of the world, not all, but some, to help make sure that kids are educated can actually make a huge world of difference down the line. And I think that’s a big thing. Making sure to be aware of your impact and what you have to offer.”

Building Tomorrow is a vibrant organization eager to expand its influence to better the educational opportunities available to students in Uganda. Their most recent initiative is entitled “Educate51k”—it is a five year, $12 million dollar plan to provide a safe, local, permanent, quality and supportive learning environment for 50,980 out-of-school children in 300+ hard-to-reach communities across Uganda. Their goal is to construct 60 primary schools across the country, recruit and train 150 Ugandan college graduates to support and strengthen 450 school management teams whose work will impact the enrollment and retention of 50,980 out-of-school children. If you are interested in partnering with Building Tomorrow and the Educate51K initiative visit their website www.buildingtomorrow.org to learn more.