By his own admission, Earle Hart isn’t suited to watching daytime television.  Good thing for jobless people that he isn’t.  Hundreds have found new careers through the Passport to Employment program he started in retirement during the early months of the Great Recession.

Not only has the Indianapolis-based program guided 1,293 into new careers but, thanks to Hart’s leveraging of resources from the host church and other contributors, the program has churned out the fresh careers at the phenomenally low cost of about $5 apiece.

“I got bored,” Hart recalls of the weeks following his retirement in January 2008.  “The feeling that I’m not accomplishing anything…”

Accomplishment is a recurring theme in Hart’s life.  Raised in a Navy family, he served in Vietnam, graduated from the University of Iowa and climbed the ladder at Sears Roebuck & Co. to district service manger.  He could have continued at Sears had he agreed to another relocation, the 14th in 32 years.  However, wanting to sink roots and develop relationships, and having come to appreciate the “Hoosier hospitality” of Indianapolis, he eased into his first retirement at age 56. 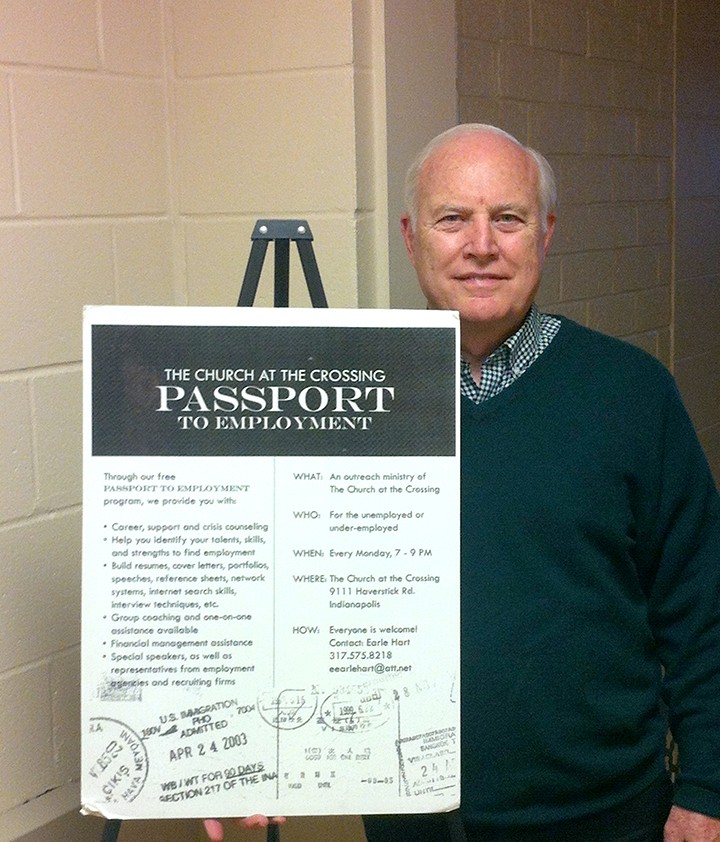 Hart set about crossing house repairs off his list and doing the rounds of visiting family.  He even took classes to learn the art of clowning.  Still, he was bored.  So he networked his way into a succession of management positions at Amish Furniture Mart, Pac-Van, and Clark Appliances.

It was during a second tour at Pac-Van that he began to hear questions about when he would retire.  Seeing the writing on the wall, he resigned only to face boredom once again.  Within days, though, two friends called the 65-year-old back to back asking for help finding jobs.  He quickly found them positions.  Soon, the building recession pushed several more friends toward Hart with questions of career guidance for themselves or family and friends.

Hart was able to help them despite his nagging discomfort with giving advice while lacking expertise in career counseling.  He learned that the pastors of his church, The Church at the Crossing, knew little more about career skills than he did, and moreover, were too busy to take on additional responsibilities.

Hart audited classes at Indiana’s career development system, WorkOne, and interviewed 150 experts ranging from human resources managers to corporate recruiters.  “If you want a satisfied customer, you need to ask the customer what they want.”

The experiences and insights were compiled into Passport to Employment, which is an outreach of Church at the Crossing that welcomes people off all faiths as well as those who claim no faith.

The program also refers clients to WorkOne and ministries and nonprofits.  Hart recalls one Purdue-educated engineer whose sedentary lifestyle between jobs caused his suit to “shrink.”  The man was sent to Danny’s Closet of Hope to be outfitted in virtually new second-hand clothing for his interviews.

A Passport to Employment guidebook helps clients walk through the job search process and companies use its jobs board to post openings.

Hart demands dedication from his dozen volunteers.  They must respond to every request unless a significant obstacle such as being out of town prevents.

A lengthy list of donations enables Passport to Employment to operate with virtually no expenses.  In the past year it has paid out only $1,000 while helping place 200 clients in careers.

The program is free to clients and employers.

In its eight years Passport to Employment has touched more than 3,000 people, including the 1,293 who have found new careers.  Not jobs, Hart stresses.  Careers.

The typical client is a white-collar professional about 45 years of age and living in northern reaches of the Indianapolis area.  Not all are within a short drive of the church or middle-aged.  Some travel long distances to be part of the support groups and others outside of Indiana download the manual.  Eighteen-year-olds have participated.  So has an 84-year-old, who landed a dream gig of shuttling new cars for dealerships.

Now 73, Hart has no plans to slow down.  Boredom vanished in the rearview mirror long ago.  Passport to Employment is helping people, and helping people gives him the purpose he craves.  Indeed, it isn’t easy for him to distinguish between faith-based outreach and citizenship.

“My faith says that my mission field is the space between my feet,” he says. “It’s where I stand.  There is no greater joy than giving.”