Carl Erskine has compiled a long list of impressive numbers. As a standout pitcher for the Brooklyn and Los Angeles Dodgers from 1948 to 1959, the Anderson native son racked up 122 wins, two World Series championships, 981 strike outs, two no-hitters, and a 4.00 earned run average. Later, “Oisk,” as Erskine’s Brooklyn fans affectionately dubbed him, won four championships as coach of the then-Anderson College baseball team.

Impressive numbers continue to follow Erskine. Nearly 90 years of life, including 68 with his wife, Betty. Four children including Jimmy, who was born with Down Syndrome and inspired a legacy of advocating for people with disabilities.

Continuing to rise alongside the numbers are Erskine’s prolific acts of citizenship. Former Indiana Governor Mitch Daniels bestowed the Sachem Award on the Anderson native Daniels described as a childhood hero who modeled character, faith, integrity, marriage and devotion.

Indeed, throughout his playing career and later in Anderson as a banking and insurance executive, Erskine made a difference countless times.

The following interview with Erskine is edited for brevity and clarity.

You have done so many things over your career regarding citizenship. What are you mainly doing these days?

“Well, of course I’m retired from many productive jobs where I’m getting paid actually (laughs). Betty and I are both active First Baptist Church, and we have been since we were teenagers. We’re active, Jimmy’s very active in the Special Olympics, and he has worked at Applebee’s Restaurant for 17 years. He has lots of support from the people who work with him at Applebee’s. I’m very active in Special Olympics as a volunteer.

I stay active with the Fellowship for Christian Athletes, which started in 1954. I happen to have been one of the first athletes invited to this new idea of athletes endorsing their faith in the same way that you might endorse razor blades or shaving cream, or some product. Speaking at high schools, universities, campuses, and elsewhere.” 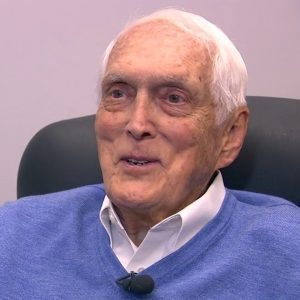 What do you do with Special Olympics, and what are you doing with Fellowship for Christian Athletes?

“With the Special Olympics, it’s an obvious connection. Jimmy was born in 1960, and by the time he was 10, Eunice (Kennedy) Shriver, who founded Special Olympics—she was a sister to Robert and John Kennedy — had a sister named Rosemary who had a birth defect of some kind. That prompted her to get into the idea of a Special Olympics.

My role has been to volunteer in whatever capacity I can help promote, and that’s turned out to be fundraising. I started to help our Madison County program and Indiana State Program. In the earlier years of Special Olympics I did a lot of travel with Mrs. Shriver, speaking on behalf of this new idea of athletes who aren’t gifted with hand-eye coordination and all the other muscle tone skills, but who can still compete at their level. It was a marvelous idea to, as she put it, ‘get these good folks who have only been spectators, into the real game.'”

How do you fundraise?

“Naturally, we have a couple of events in Anderson. I play harmonica, and I play with some of my buddies who are outstanding musicians. And 26 years ago we didn’t want to start another golf tournament, and I said, ‘Can we do a country music show?’ So we started doing a little something like a Little Bit of Country Jamboree at the Paramount Theatre, which had just been restored. We draw about a thousand people and we have sponsors, so we’ll raise a good piece of our budget with that event.

Breakfast with Santa is another event. For a number of years we had restaurants in a program called Gourmet Sampler. An organization named Lee’s brings together about thirty restaurants in a setting where they can demonstrate their individual best dish and people pay a fee to go to the booths and taste all the foods. We usually raise a few thousand dollars with that.

And then an odd thing. Of course I was in professional baseball and I get a lot of chances to interview. I was interviewed one time by Sports Collectors Digest and was asked, ‘Do you charge for autographs?’ I said, ‘No, no, I never charge a fan who wants an autograph, I wouldn’t do that.’ But I do encourage fans who write and say ‘If you have a charity I’ll send you a donation for signing.’ And I do say, ‘Well, Special Olympics is my charity.’

So I get probably six to ten letters a day from all over about my career with Jackie Robinson and all those great players I got to play with, and they’ll say, “Mr. Erskine, can you please sign this? Here’s $5, here’s $10, here’s $25. Once in a while I’ll get a check for $100 from some fan. And then I get random gifts. I do a lot of speaking. When I can I get an honorarium for Special Olympics.

And then about five years ago, working with the state Special Olympics, I wrote a little book called The Parallel. It’s about my nine seasons with Jackie Robinson and my lovely time of raising my little son Jimmy, both who are in a population that wasn’t well accepted at the time, in fact not accepted at all in the mainstream. I donated it to Special Olympics Indiana to use as a gift to their major donors.”

Jumping to Fellowship of Christian Athletes, what are you doing with that organization?

“Well, I kind of donate to the causes, both nationally and state-wide. There was a time when I did a bunch of speaking on behalf of FCA. I still do some of that, but just around Indiana. And I’ve attended a lot of their conferences, summer events.”

Why is FCA so important to you?

“Mother used to take me to church when I was small. I’ve always kind of had a faith life even though it has had to grow over the years. So I was approached by the founder of what became the FCA — I was still playing with the Dodgers— in a hotel in Philly, The Waldorf. He had seen an article in Guideposts Magazine where I was quoted and had come east with the idea of pro athletes speaking about their faith as an endorsement. He also hosted other athletes whose articles he had found where they mentioned their faith. He came to explore the idea, ‘Could you guys get together and get something going?’

I was reluctant. I had never spoken publicly about my faith, but that helped me grow a great deal. And there’s a lot of sports illustrations that fit life so well and fit the faith so well that it’s a very good vehicle to help young people see the spiritual side of all of us. We know how to develop physical and mental pretty well, but FCA encourages a spiritual connection as well.

I always say that Christ gave a lot of great examples throughout his parables. Well, sports is full of great parables about life, and so it was a nice match-up.”

Your generosity has gone a long way in Madison County. Deep down, what motivates you?

“That’s an easy answer. Thanksgiving, gratitude. I was a skinny kid, grew up kind of on the low economic end of the scale — we weren’t on welfare but we had hardworking parents. And then to have a blessed life with abilities that were unique — I could throw a baseball pretty hard.

The second blessing I had was, I could learn fast, my aptitude for learning to make the baseball curve and all speeds and fastballs and so forth. I was an average student in school, and yet I had an inquisitive mind and always wanting to know why it worked that way.

So I was blessed with those things. I didn’t earn them from anybody.

I think that’s true of most people who want to give back, to want to help. Betty and I never had any grand plan. We did what came naturally.”

You’ve seen a lot of acts of citizenship over your lifetime. Do any stand out?

“Well, they’re happening all the time, it’s almost a moot point. We sometime get the feeling that everybody’s selfish, and withdrawn, and taking care of themselves and the heck with the rest of you. But that’s not true.

Citizenship mostly relates to understanding that people around you are fighting their own particular battles and you gotta give people a lot of room.

I tell young people, when you get up in the morning, do you ever think about, when you flip the lights on, where that came from? Before us, this was an Indian village, and then before that it was just a place along the White River. But now we have streets, and lights and water. My golly, look what we got.

If you start out by knowing that you are actually an heir, a benefactor of what somebody else did that you never met or would never know, you need to do that. I think all of life really should start with thanksgiving and praise because you have life yourself.”