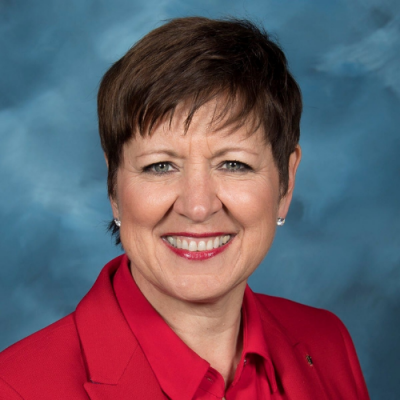 Allison Barber, Ph.D., is the President and COO of the Indiana Fever, Indiana’s WNBA franchise.

With a career that spans from a schoolhouse to the White House and now to the Fieldhouse, Allison Barber has a successful record of building brands and maximizing impact.  From grade school teacher in Merrillville, Indiana, to communications strategist in the White House and United States Department of Defense; and as the first chancellor and chief fundraiser for Western Governor’s University (WGU) Indiana, Allison has dedicated herself to creating pathways to help individuals reach their potential.

Now, as the President and COO of the Indiana Fever, she has set her sights on building and inspiring Fever fans in all 92 counties of Indiana.  Barber understands the power of playing sports, a college athlete who lettered in tennis and softball, she values the positive impact sports can have on both children and adults.

Barber holds a B.S. in Elementary Education from Tennessee Temple University; a M.S. in Elementary Education from Indiana University; and a Ph.D. In Leadership from Tennessee Temple University. She is the recipient of the Department of Defense Medal for Distinguished Public Service awarded by Defense Secretary Donald H. Rumsfeld and was recognized as a Woman of Influence by the Indianapolis Business Journal.

In March 2019, she was presented with Indiana’s highest honor, the Sagamore of the Wabash, presented by Governor Eric Holcomb. Barber is a state lead volunteer for the American Red Cross and serves on the boards of the Indiana Chamber of Commerce, the Indiana Destination Development Corp., and the Elizabeth Dole Hidden Heroes Foundation.