Some Books Make Us Free

We are living through what feels like an era of unprecedented division. But we also have before us an unprecedented opportunity. The coronavirus crisis divided us physically. The protests against deep racial injustice in our nation’s past and present—and the subsequent violent riots—divided us further politically. In light of these events, the theme of our 2020 Citizenship Art Gallery focused on an essential aspect of citizenship in a democracy: political dissent. Over the last few months, we have seen tens of thousands of people across the country exercising their right to criticize what they see as the weaknesses of our country and demand change. We have seen this through peaceful assembly, petition and protest. Many participate because they love America and want to see it do better. But how much more effective can these protests be when informed by how our system of government and our institutions work?

This year, we used art to bring life to ideas around the mechanics and philosophy of our system of government. We paired protestor art with rare books to show how the ethos of the protests and political dissent are manifestations of classical democratic ideas. This includes art that recognizes achievements and learning from mistakes to the end of better living up to our founding ideals. We invite you to explore the art gallery below and reflect on the artists’ responses and interpretations of these rare books. These works include an early edition of the Magna Carta, an early edition of Samuel Johnson’s famous English Dictionary, a first edition of Jean Jacque Rousseau’s Social Contract, a first edition of Henry David Thoreau’s work, and an original, first edition of Alexis de Tocqueville’s Democracy in America—and much more. Thank you for being part of this conversation with us.

Can Media Elevate Our Public Discourse?

Voltaire had a lot to say about French society. Openly critical of the monarchy and the cultural and political tyranny of the Catholic Church in France, Voltaire was imprisoned, punished, and famously exiled for his satirical novels, essays and plays. After his second imprisonment in the Bastille, Voltaire left Paris and fled to London were he lived in exile for 2 years. During that time he mastered the English language and wrote a series of essays about his observation of the benefits of English society. “Letters Concerning the English Nation” is Voltaire’s most important early philosophical work. The letters reflect Voltaire’s admiration for the science, toleration, political institutions, and general intellectual freedom of the English people. His observations were clear implied attacks on the French monarchy and the corruption of the French government and the Church. These criticisms were not well received in France. Copies of the book were burned and warrants were issued against Voltaire.  Eventually he came to be viewed as one of the fathers of the enlightenment and people in France and England and throughout the world were profoundly influenced by his writing and ideas. He returned to Paris where he continued to write in his insightful, satirical style. He became the most prolific and popular playwright of his day.

In 1835 Alexis de Tocqueville was just 21 when he was given a commission from the French government to study the prison system of the United States - a new nation itself just over fifty years old. After nine months of travel throughout the US, de Tocqueville returned to France, wrote and submitted his report and then went on to write his detailed observations about the new experiment in democracy in America. His two volume work “Democracy in America” is widely regarded as one of the most insightful investigations into the political thought, culture and social life of any particular country. The fact that it is about the first nation in modern history to establish government of the people, by the people and for the people has made Democracy in America one of the most most widely studied and admired works in the world. Alexis de Tocqueville found much to praise in America. He also found much cause for concern. He understood that democracy is a fragile thing and issues like racism and inequality which de Tocqueville observed in 1835 continue to threaten our democracy today.

Paired with Tocqueville’s Democracy in America

Stanton’s address called upon the legislature of New York to acknowledge numerous rights of women. She particularly urged them to allow women to vote. To the Legislature incorporates symbolism to show who Elizabeth Cady Stanton was. She is holding up what is known as the “hand of blessing” in Catholic iconography, which is how I imagine the women of her time experiencing her address. In her other hand she is holding a printed version of her address, which was published and distributed in New York. The surrounding birch trees signify “new beginnings” in Celtic mythology because the bark constantly peels away to reveal new layers beneath. The New York State capitol is in the distance.

TO THE LEGISLATURE BY ALICIA ZANONI

Paired with Stanton’s Address to the Legislature of New York

"Two thing that fill the mind with renewed and increasing awe and reverence the more often and the more steadily that they are meditated on:

The starry skies above me and moral law inside me.  I have not search for them as though they are veiled in darkness or were in the transcendent region beyond any horizon; I see them before me and connect them directly with the consciousness of my existence." -Immanuel Kant

Language is how we order our thoughts and ideals  It is how we communicate those thoughts to one another.  Words have meaning and while language changes over time through ill use the essential meaning of words does not change. Words like Truth, Freedom, and Equality are immutable and express ideals that remain constant whether we live up to them or not. A dictionary is a vital anchor in the stormy sea of changing times, of ascending ignorance and the misuse of language.

Etymologies and Derivations by Kipp Normand

In this book, Plato gives an account of Socrates’ trial. Socrates was in some hot water with the leaders of Athens for supposedly corrupting the minds of the youth with his new ideas. Contrary to our modern understanding of the word “apology,” Socrates was not saying he was sorry for his beliefs. Rather, the root word here is the Greek, “apologia,” which means, “defense.” What, then, was Socrates defending? He was defending the idea that all principles should be questioned, and that a person was only wise if they didn’t think they were wise. This ruffled the feathers of some scholarly leaders in Athens who did in fact think they knew it all. They took what Socrates said very personally, and believed his humble curiosity threatened their foundation of knowledge. It’s also interesting to note here that religion and intellectualism were deeply intertwined in Athenian culture. Greeks believed their gods protected their cities, and so they feared their city would be under the gods’ wrath if Socrates continued to raise questions in the minds of the youth - many of these questions being about the gods and the human soul. Ultimately, then, not only were they offended that he didn’t think they knew as much as they thought they knew, but they were also afraid the gods would unleash a vengeance on Athens. Pretty intense. It’s hard to say which was the greater motivator for them to put Socrates on trial, but regardless, they did, and he was sentenced to death. Near the end of his trial, Socrates once again defended the wisdom of curiosity, stating, “an unexamined life is not worth living.”

Farther Along shows the same scene broken into three sections. I thought about the idea that our understanding of what is true changes as we take in more information. Looking only at the dark sky in the left painting, we would have no idea about the bright sky in the far right painting. Each of these paintings are only a section of the whole. I believe this practice of looking at more information and not allowing ourselves to have tunnel vision was what Socrates’ ideas were all about.

Farther Along by Alicia Zanoni

Paired with Plato’s Apology of Socrates, and Phaedo

This work by Rousseau was published during the peak of the French enlightenment, a period in time that questioned and re-directed many aspects of social, political, and religious tradition. “On the Social Contract, or Principles of Political Rights,” did just that, specifically regarding the way the government operated in France. Rousseau argued that the ruler’s decisions should be a reflection of the will of the people. Taking it a step further, he argued that it was not enough for just some of France’s citizens to have a voice (the elite), but that every citizen had this right and responsibility. He denounced slavery repeatedly throughout his writing, pointing out that the practice of placing one human over another was “against nature.” To Rousseau, the right and natural order of society was for every citizen to be equally permitted to participate. If this sounds like democracy as we understand it today (at least how we hope it looks), it is! In fact, Rousseau was called by many the “prophet of democracy.” As familiar as we are with these ideas, they were very new to his readers in France at the time. In fact, these ideas were so provocative that they fueled the French Revolution.
Just as Rousseau’s ideas flooded the social and political landscape of France, I painted a burst of color in the sky in Shaking it up Like Rousseau. The light illuminates the scene and contrasts with the surrounding shadows - a literal “enlightenment.”

Paired with Rousseau’s On the Social Contract

“And the multitude of them that believed were of one heart and of one soul; neither said any of them that ought of the things which he possessed was his own; but they had all things common. And with great power gave the apostles witness of the resurrection of the Lord Jesus; and great grace was upon them all. Neither was there any among them that lacked: for as many as were possessors of lands or houses sold them, and brought the prices of the things that were sold and laid them down at the apostles feet; and distribution was made unto every man according as he had need.”

“Today we are engaged in a final, all-out battle between communistic atheism and Christianity.  The modern champions of communism have selected this as the time, and ladies and gentlemen, the chips are down - they are truly down.”

Why Are We So Afraid? by Kipp Normand 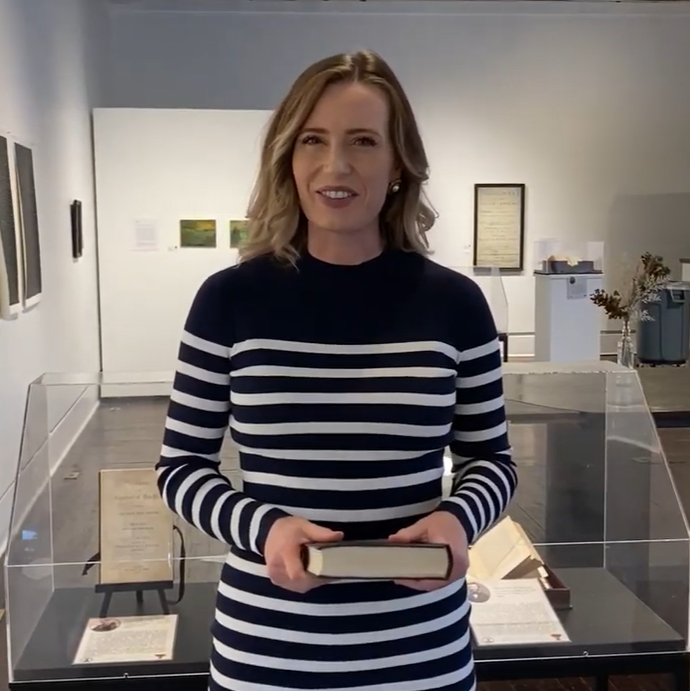 take a virtual tour of the exhibit 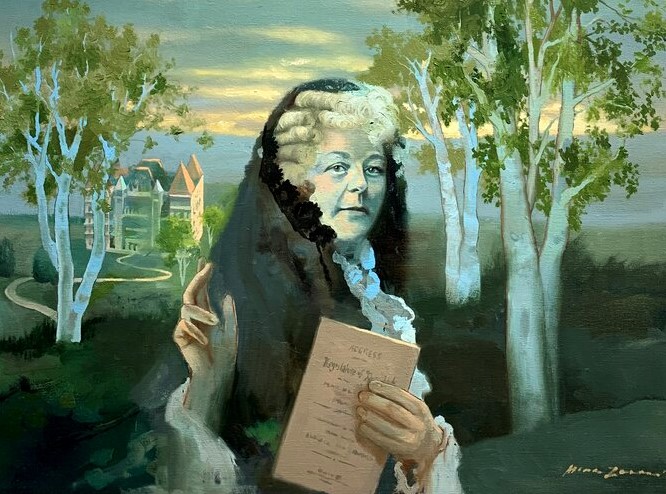 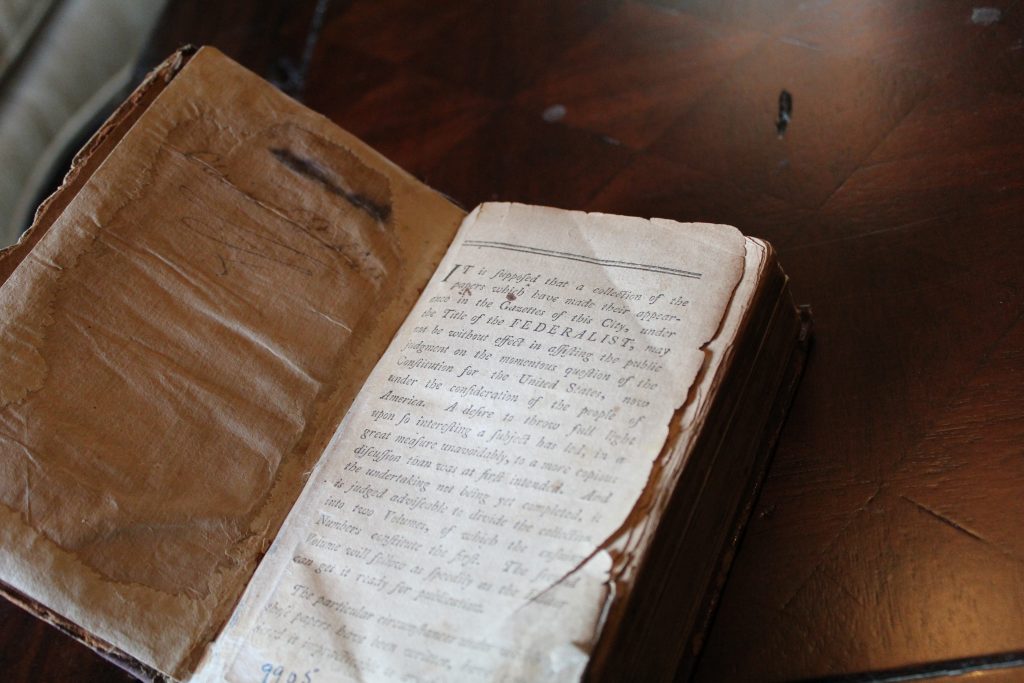